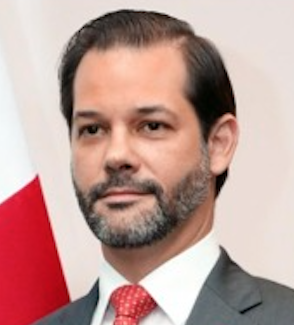 Ambassador Ramón Eduardo Martínez de la Guardia (Panama City, Panama, November 17, 1977) has a degree in Law and Political Science and on May 10, 2022, was appointed by the President of the Republic of Panama, Laurentino Cortizo Cohen as Ambassador of Panama in The United States of America.

He completed his school studies at Colegio Javier, where he graduated in 1994. He continued his studies at the Universidad Católica Santa María la Antigua where he obtained a Bachelor’s Degree in Law and Political Science in 2000.

He has more than 17 years of experience in the practice of Commercial and Corporate Law, advising various local and international companies in the areas of retail trade, representation of international brands, wholesale trade, free zones and special regimes, investments. real estate and financial sector.

On May 24, 2019, he was appointed Minister of Commerce and Industries by President-elect Laurentino Cortizo Cohen. From this portfolio, he has dedicated himself to promoting the development of industry, local and international trade, and the attraction of investments that generate economic development for the country.

« HE Alexandra Papadopoulou
HE Marek Magierowski »