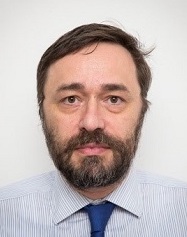 Radovan Javorčík has assumed his duties as the Ambassador Extraordinary and Plenipotentiary of the Slovak Republic to the United States of America in January 2021.

After graduating from the Slovak Technical University (Faculty of Mechanical Engineering) and Institute of International Relations at the Comenius University in Bratislava, he joined the Office of the President of the Slovak Republic in  Press and later Foreign Policy Department. Since 1995 he is loyal to the Slovak Foreign Service.

At the Slovak Ministry of Foreign Affairs he held a position of  Deputy Director of the Policy Planning Department. After posting at the Slovak Permanent Mission to NATO (1998 – 2002), he continued to work on NATO files as a team leader and later Deputy Director for Security Policy. He was part of a team preparing Slovakia’s accession to NATO, mainly in capacity of the Head of PRENAME (Preparation for NATO Membership Programme).

His next posting at the Slovak Embassy in London (2005 – 2009) included duties of a Charge d‘Affaires a.i. (2005-2007). He then served as Director of Department for North America and Wider Middle East and again as Director for Security Policy. Later he assumed duties as the Slovak Ambassador in Israel (2011 – 2015). After serving as the Head of the Cabinet of two Deputy Foreign Ministers, he returned to Brussels in 2017 as Ambassador and Permanente Representative of the Slovak Republic on the North Atlantic Council (NATO).

Mr. Javorčík is married to a fellow Slovak diplomat Michelle Joanne Javorčíková with whom they have two sons. He speaks fluent English, Czech, Russian and understands French and colloquial German and Spanish.