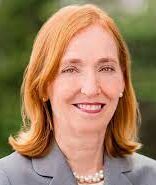 Emily Margarethe Haber has been German Ambassador to the United States since June 2018.

Prior to her transfer to Washington, DC, she served in various leadership functions at the Foreign Office in Berlin. In 2009, she was appointed Political Director and, in 2011, State Secretary, the first woman to hold either post. Thereafter, she was deployed to the Federal Ministry of the Interior, serving as State Secretary in charge of homeland security and migration policy from 2014 until 2018.

Emily Haber has many years of experience with Russia and the former Soviet Union. She held various posts at the German Embassy in Moscow, including Head of the Political Department. At the Foreign Office in Berlin, she served as Head of the OSCE Division and as Deputy Director-General for the Western Balkans, among other positions.

Emily Haber holds a PhD in history and is married to former diplomat Hansjörg Haber. The couple has two sons.