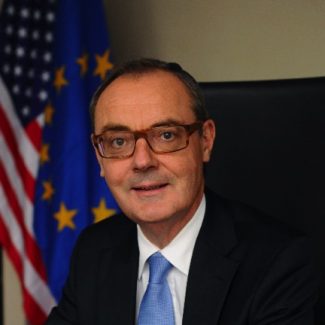 Ambassador of the European Union and Head of Delegation

Prior to arriving in the United States, David O’Sullivan served as the Chief Operating Officer of the European External Action Service.

David O’Sullivan was Director General for Trade from 2005 to 2010. Previously he was Secretary General of the European Commission from June 2000 to November 2005, Head of Cabinet of Commission President Romano Prodi and Director General for Education and Training.  He started his career in the Irish Foreign Ministry and spent four years in the Commission Delegation in Tokyo.   He also has extensive experience in EU social and employment policy. David O’Sullivan has a background in economics, graduating from Trinity College, Dublin and having completed post graduate studies at the College of Europe, Bruges.   He holds an Honorary Doctorate from the Dublin Institute of Technology.  He is also a Member of the Consultative Board of the Institute for International Integration Studies at Trinity College, Dublin.  He is a visiting Professor at the European College of Parma and was awarded Alumnus of the Year 2013 by the College of Europe, Bruges.  In June 2014, David O’Sullivan was awarded the EU Transatlantic Business Award by the American Chamber of Commerce. He was awarded an Honorary Doctorate from his Alma mater Trinity College, Dublin in December, 2014.

He is married with two children.